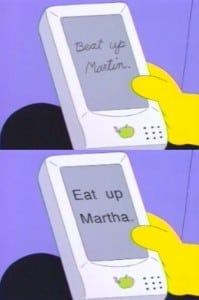 Success is typically viewed as the result of continuously doing things right. The truth is, though, that most success is actually the result of doing things wrong. In fact, true success requires failure. The Wright Brothers could barely get a five-foot box kite off the ground, Henry Ford lost his first automobile company, and Disney’s Laugh-O-Gram studio went bankrupt. Even one of the biggest game-changers of my generation, Steve Jobs, is no stranger to starting over.

As the iconic leader who introduced the iPod, iTunes, the iPhone, and the iPad, it’s easy to forget that Jobs didn’t always pick a winner. His vision for the future became the future…but not overnight. In spite of the waves of posthumous praise, I don’t think I’m the only one who remember Jobs’ not-so-public reputation as a fiercely controlling authoritarian, who “cast aside politeness and empathy” in the pursuit of greatness.

As the original helmsman of Apple, Jobs was responsible for some pretty horrendous failures, including…

…the Apple I and Apple II flops and the ridiculously expensive Lisa.

Apple’s failures even made it to pop culture (as seen in the classic Simpsons clip that skewers the Newton’s attempt at handwriting recognition).

It was Jobs’ long list of “not-even-close” endeavors, however, that paved the way for his homecoming.  In reality, his chronic failure changed the face of personal computing forever.

Along these lines, luminaries like author Seth Godin challenge all of us to fail. Although Godin admits that we would be horrified if airline pilots regularly “tried something new,” he asserts that the rest of us still have to look for “a risk you can take and still keep playing.”

Think about that for a second. If that game changer you’ve been pondering doesn’t threaten someone else’s mortality, what’s stopping you from taking your first step (and then the next, and then one back, etc.) toward greatness? Ultimately, we are scared of our own imperfections. Rarely does great success come without great risk, though, and imperfections are an integral part of that.

Sometimes, it’s hard to see how far we’ve come without seeing where we were not so long ago:

Seth Godin sees entrepreneurs as, “obsessed with what everyone else is doing because they are afraid someone will say, ‘Oops, you failed’.” It’s precisely these little failures, though, that provide such large amounts of valuable feedback. How else can you learn to adapt quickly and fine-tune your future endeavors?

The speed at which things move today can be staggering and overwhelming, but we have the unique opportunity to use our online circles to provide praise or criticism, which assists us in determining which parts of our ideas are "failures."

Entrepreneur Chris Brogan urges people to “fail often, fail fast, and learn.” To Brogan, failure is “a beautiful thing.” He advises companies to release prototypes and launch “unfinished” products in order to get the kind of essential feedback necessary to create something that will really take off.

Physicist Neils Bohr quipped, an expert is “a person who has made all the mistakes that can be made in a very narrow field.” People (and companies) learn by screwing up now and again; to ignore failure is to ignore essential information.

I’m a fan of Avinash Kaushik, Google’s digital marketing evangelist. I think Kaushik put it best when he said, “I believe God created the Internet so we could fail faster. In the offline world it is very expensive to experiment and test, the cost of failure is very high. As a result we don’t take risks. We keep doing what we think ‘works,’ until the day we go bankrupt. The web changes that. You can take dramatic risks, at very low costs, and learn big.”

Netflix is a great example of this. When the DVD giant recently decided to split its services into two entities, its unhappy fans pushed back. In three short months, Netflix lost more than one million customers and, as a result, the company’s stock plummeted 65%. Netflix reacted quickly, quashing the separation idea and pressing forward to recover. (Whether that "save" will be successful or not, remains to be seen. The important thing is to note the speed with which it happened.)

The halls of big business are lined with portraits of people who took radical risks and failed—sometimes quite often. The fact is that true pioneers dream, try, fail, learn…and start dreaming again.

And so, in implementing my “chunk of change” philosophy, I pray that I—just like Steve Jobs—embrace failure in such a way that I manage to completely change the way entrepreneurs see themselves and their potential for greatness.

Today is the day to dust off that idea, start a whiteboard of how to develop it, and passionately recruit the resources that will help you to launch it. (And count me as one of those resources!)