As an incredibly busy business owner and working mom, I was one of the four-million early adopters anxious to learn how to use the new iPhone 4S to my advantage–as quickly and efficiently as possible.

Like other Apple junkies, I eagerly watched the Siri trailer and listened intently to all of the amazing things that the "virtual assistant" was designed to do.

Let me assure you, though, Siri isn’t quite as easy as she seems (ahem).

After a full week’s worth of trial-and-error, I managed to figure out a few things about Siri that aren’t in her FAQs. Now, to boost my computer Karma, I’m letting everyone else in on the tech tricks I’ve picked up along the way… 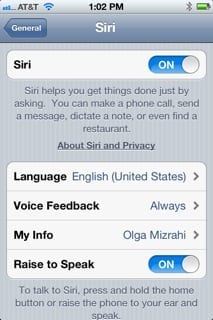 Before jumping right in, let your new "friend" get to know you better. Siri will be able to assist you best if she knows who you are, where you are, and who’s important to you.

Go to: Settings > General > Siri > My Info. Fill out your own contact information, through your address book, thoroughly.

(Note: You may want to create two separate contacts for yourself: one that includes everything Siri needs to know, and one that you use to share with others–so that you don’t inadvertently give your home address to your professional contacts.)

The more Siri knows about the people in your life, the easier it will be to contact and interact with them. There are two easy ways to add a relationship:

1. Go into your own contact. Click “Edit.” Click on the name of a relationship (e.g. “ mother”), which appears underneath your address. Either choose one of the given labels or click “Add Custom Label” and use the arrow to choose a name from your contacts.

2. Go into someone else’s contact information. Click “Edit.” Click “add field” at the bottom of the screen. Choose “Phonetic First Name.” Either type in the name you want to use, or click on the microphone to have Siri record it.

(Note: You can also give a contact a “nickname,” in a separate field, but Siri doesn’t seem to access that information as easily as she does “Phonetic First Name,” so you may want to stick with that.)

Once Siri understand who’s who in your life, you can use verbal shorthand, like: 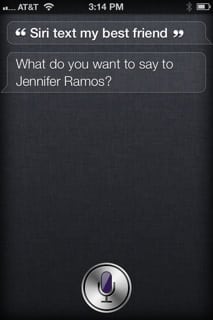 (Note: Siri has a hard time understanding contacts that have the same designation as her standard relationship options. For instance, if you designate Bob Jones as your “brother” and then Larry White as your “brother from another mother,” Siri won’t be able to get past the word “brother.” You can, however, designate more than one person with the same relationship. If you designate Bob Jones as “brother” and Larry White as “brother,” when you ask Siri to "text my brother,” she will ask you which brother you want to text.)

Add a contact for any place that might be particularly helpful in a location-specific context, even if you wouldn’t normally include them in your contacts. (Good examples include things like "Grocery Store" and "Babysitter.")

Once your key relationships and locations are established, you can get Siri to do things that combine the two like, "remind me to pay Becky when I get to the babysitter" or "remind me to pick up milk when I go to the grocery store."

Save yourself a few seconds on the things you do most.  For instance…
• When a text or email comes in, just tell Siri, "Reply," and then dictate away.
• Instead of spelling out "on my way," just type "OMW," and autocorrect will complete it for you.
• Create an “expenses” note and then tell Siri to "Add $12 for gas to my expenses note."
• Ask Siri about your appointments by saying things like, "What does the rest of my day look like?" or "What do I have scheduled on Monday?"

Other things I’ve found particularly useful include commands like:
• How’s the traffic?
• When is Susan Smith’s birthday? (Note: This needs to be pre-entered in your contacts.)
• Find people who work at Wells. (Anyone in your contacts whose company field is specified as “Wells Fargo” will be given as an option.)
• What time is it in London?
• What is the date next Saturday?
• Set the timer for 45 minutes.
• Show me new emails about the party.
• How do I get to my dad’s house?
• Where’s McDonald’s?
• How much should I tip for 8 people for $157.36?
• How cold is it in New York? 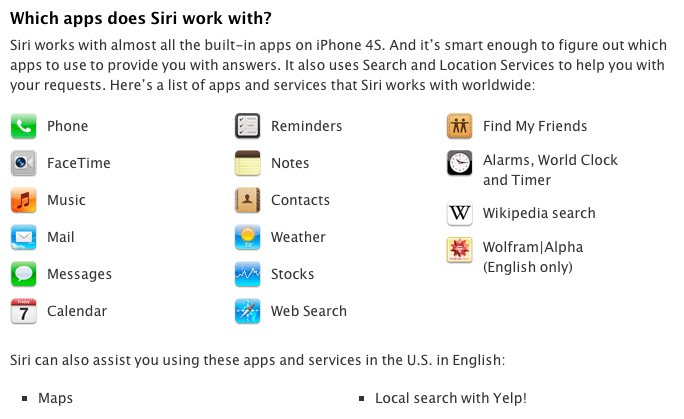 A particularly cool aspect of Siri is her ability to learn. If you ask Siri a question, she will underline the important nouns in blue in her reply. If she’s misunderstood you, you can tap on those words and edit them using the keypad. Since Siri is adaptive, she will learn from your edits

BONUS: Have A Little Fun

When productivity time is over, amuse yourself by asking Siri some smart-ass questions, like: 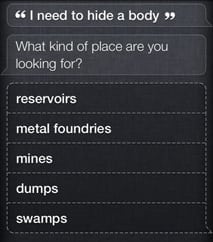 If you want to go more dark side (think HAL) maybe you need the IRIS 9000 voice control module.

What are your favorite tips, tricks, or leisure-time laughs? Tell me what Siri does for you!

UPDATE 11/17/2011: Per Esther Yeh on Quora, One suggestion to add to your post: editing the shortcuts such as omw in the Keyboards setting. I put my email addresses in so I only have to type the first few letters (or if your emails are all the same, then I create easy to remember nicknames for those emails, such as brk for my Berkeley email).

And frequently used addresses, I log them as the building number. These come in real handy when filling out forms or logging in to apps online (or even when entering in your Apple ID…doesn’t work for passwords but don’t think you’d want it to!).

Also, you can speak the relationships to Siri instead of typing them in. Lift the phone to your ear to activate Siri, and say "David is my brother" and it’ll remember that.