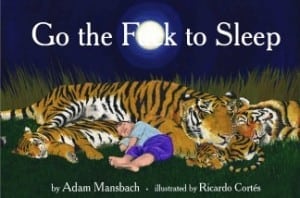 The children’s book for adults, “Go the F**k to Sleep” by Adam Mansbach, has sold more than 100K copies and been number one on Amazon’s bestseller list. And it hasn’t even been published yet.

I think that there are four of reasons that a book/video/article/image will go viral. First…

…The idea itself is really, really clever. Second, there’s an immediate understanding of what it’s about. Third, something about that idea that rings true. And, finally, it’s just f**king funny.

The point is, your ads and marketing messages won’t just magically “go viral.” The bar has been raised: you have to be witty, crystal clear, relatable, and hee-larious. It also helps if it’s free—as was the case with the leaked PDF of Mansbach’s book that circulated around the internet like wildfire.

I think all business have to get their heads around how to package something that it’s free, transparent, and readily available…and still figure out a way to make money. Of course, there is something to be said for giving stuff away for free in the hope that it will generate legitimate sales. For example, even though countless people have read the full PDF of Mansbach’s book online, more than 100,000 consumers want to own a solid souvenir or share it with others by giving it as a gift.

Seth Godin recently talked about the success of Mansbach’s book. You can (and should) listen to the MP3 here. Godin made some interesting points about the shifting landscape of publishing and how it inspired him to create The Domino Project in 2010. “Just because [publishers] don’t like it,” says Godin, “doesn’t mean it’s not happening.”

I’m doing something very similar with Chunk Of Change, actually. This is just a blog for the time being but, ultimately, I plan to publish all of these ideas (and more, of course) as a book. Will people buy a hard cover if I “give away” all of my ideas online?  I’m banking on the fact that they will—as long as I can also deliver a host of other great ideas, as well as a bunch valuable extras (like worksheets, checklists, case studies, and more).  We’ll just have to wait and see what happens.

It’s not just about books, though. No business is safe. At some point, that thing that you’ve been keeping hidden—or that delivery vehicle that has been traditionally safe—is going to be blown wide open. You’ll have to deliver value in different ways. I hate to break it to you, but you’ll probably have to find a new delivery vehicle for that value, as well.