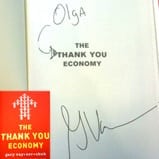 I recently went to see Gary Vaynerchuk , author of the bestseller “The Thank You Economy,” speak about “How to Get the Biggest Returns from Caring About Your Customers the Most” at a Linked Orange County event.

Gary Vee, as he’s affectionately known, is a dynamic speaker, who makes a lot of bold statements (with occasional expletives). He’s not afraid to stake his claim on a specific prediction or viewpoint, which is rare in a world of waffling and doublespeak. I thoroughly enjoyed his talk and took away some really great points…

…Five of them, actually.

1. Don’t think that the “big guys” don’t get social media. They do. They’re just playing a different game than you.

First of all, notes Gary, Wall Street doesn’t treat big brands kindly if they go after the newest innovations. Until they get rewarded for embracing new technology, all that the corporate giants care about is the share price. Second, it’s not that they don’t have the capacity to do it, but they need to hold on to what they have. Why didn’t Blockbuster didn’t go “all in” against Netflix when they saw the shift coming? There was too much risk for switching over to a new technology. My feeling is this: Until you have to worry about “shareholder value,” you should take advantage of the opportunity to use your innovation and flexibility to go toe to toe with the largest companies in your arena. 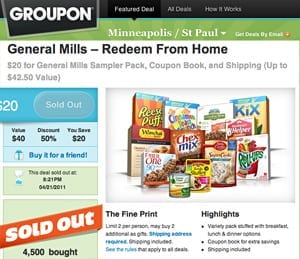 Gary asserts that retailers and resellers should be really worried. Social media is allowing big brands to talk directly to their end users. That relationship is bound to lead to manufacturers selling directly to those customers. Obviously, if you’re General Mills, you don’t wanna piss off Wal-Mart. Even so, the food manufacturing giant actually did a direct-to-consumer Groupon and cut out the middleman completely. This is a major first and, Gary believes, a strong indication of things to come. Retailers have to find a way to show they’re valuable, beyond the basics.

3. Forget the “content is king” idea. The new winners are going to be those that understand that “context is king.”

With more content being written online than ever before—and growing exponentially with every passing year—the lines have been blurred between unfiltered information and credible data. As a result, the idea of content is becoming less valuable and the idea of context is becoming more valuable. The future of information will be about where information appears, who has provided it, and how it has been vetted (meaning that it has been verified or checked for accuracy or validity). Enough people have been burned by the “no vetting at all” era that Gary believes that the pendulum is bound to swing the other way and that sites like Quora will become increasingly prevalent.

People have been so over-advertised to—especially because media is dying—that their bullshit detectors are now very finely tuned. Pre-scripted form letters, crafty marketing messages, and legalese gobbledygook set off alarms. According to Gary, as soon as customers get a whiff of them, they think “Ew! That smells like shit and I don’t wanna go there!”

5. Social media isn’t media at all. It’s a disruptive conversation.

We are experiencing a fundamental change in the way businesses and consumers communicate. Actually, it’s a disruption, of sorts. For example, an offhand remark (such as a Tweet about what you just ate) can impact a friend’s purchasing decision (such as going to eat at that same restaurant). Our relationships are based on emotional connections and, therefore, have a significant influence on what we buy. In fact, emotion is the most powerful motivator.

I’m wondering how all of this is panning out on your end.