As far as the gig economy goes, millennials are on the cutting edge, leading the charge when it comes to nontraditional work.  Right?  Well, maybe not.

The Washington Post recently reported on a new nationwide poll, carried out by EY and the Economic Innovation Group, which suggested that millennials (18 to 34-year olds) are “not that entrepreneurial.”  This statistic flies in the face of conventional wisdom, and the man-bunned startup founder you thought was well on his way to an IPO.

Of the 1,200 young workers surveyed, a shocking 44% said that “the best way to advance in their career is to stay with one company,” while 25% said that success can be found by “moving from job to job at different companies,” but only 22% advocated for “starting your own company.”

EIG’s co-founder and senior director for policy and strategy, John Lettieri, commented that “Millennials are on track to be the least entrepreneurial generation on record, and that has huge implications for our economy going forward.”

In June, I spoke at a national fraternity event to hundreds of collegiates and found that they are at an interesting crossroads.  It’s clear that the education they are getting is not preparing them for the new economy.  They aren’t sure how to brand themselves, find different avenues of work, act as small business owners, or operate as entrepreneurs.  They know that “old school” careers are few and far between, but they don’t really understand how to forge their own paths.

I thought, for sure, that this up-and-coming generation would be “on it,” with LinkedIn profiles, portfolio websites, pro social media connections.  And, yet, many of them asked me how to better tool their traditional resumes and interview more successfully for 9-to-5 jobs, both of which are disappearing.

Maybe this is because, according to The Post, “Many millennials describe starting a business as personally out of reach, often for financial reasons. The generation is clearly struggling with low wages, heavy student debt, and a grim economy, all of which have pushed them into deeply risk-averse career paths.”

For those who have already chosen a tried-and-true path (namely, four-year colleges and universities), the idea of striking out on their own once they have a degree is unfathomable.  They’re simply not prepared to make a living without a biweekly paycheck.

Thus, it’s no surprise that we have the highest number of 18- to 34-year olds in history still living with their parents.  Between minimum wage and crippling student debt, millennials just can’t seem to catch a break.

Not shockingly, the EY and the Economic Innovation Group study also showed that most millennials are distrustful of institutions (like banks, corporate America, the federal government, and the news media). “More than 70% said they worried some or a lot about not having enough money to live on when they retired and about whether Social Security will exist in their older years.” 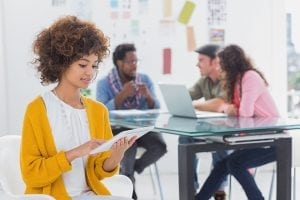 Therein lies the rub: if you don’t trust the companies that have traditional jobs, and think that the security that you are after will actually disappear by the time you will retire, why do you look to those same 9-to-5 jobs as the path to success?

It’s as if the younger generations are burying their heads in the sand.  If they don’t acknowledge a potential failing of the system, then it just won’t happen.  Perhaps it’s simply that they’re not being adequately prepared to find a different (more entrepreneurial) way out.

Steve Glickman, co-founder and executive director of EIG, notes that, while millennials are trying to do everything society tells them to get ahead (i.e. get educated and work hard), “they’re finding those decisions more and more difficult.”

It look like it’s up to us (the freelance economy advocates) to teach millennials how to make their own ways in the world.  I’m curious to know that you think.

Comment below!  What should we teach future generations about the future of business?  How can we train them to think differently?  What kind of mentorship can we provide that will better prepare them to lead…and move out of mom’s basement?