Where is the gig economy heading?  Are gig side jobs, with their disruptive app side kicks, leading growth, or are they just an annoying fad?  Based the polarizing comments on a recent freelance economy article I wrote for the Long Beach Post, there is a lot of uncertainty.  Not everyone is thrilled about the prospect of nontraditional work.

MB City Girl commented, “It’s sad young people can’t get real jobs anymore. And now the hipster press is going to feed them a bill of goods about how great the gig economy is.”  Curious to see how far this sentiment extended, I went on a quest to find out the latest. 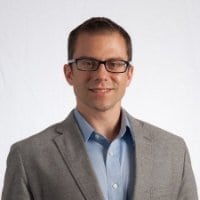 I read an interesting post by blogger John Natale, full of facts and figures about the wonderful world of the freelance economy.  Specifically, it looked at “the smallest of small companies—firms run by one person with no paid employees” (including full-time gigs and side ventures).  Of these, 75% made upwards of $5K in annual revenue.

Apparently, in the past 10 years, there has been a 23% spike in the number of “nonemployer businesses” in the U.S., bringing the total to 23 million (as of 2013).  The blog explained that, “in terms of revenue, one-person shops generated $1.1 trillion in business receipts in 2013.”  Yeah, that’s trillion with a “T.” 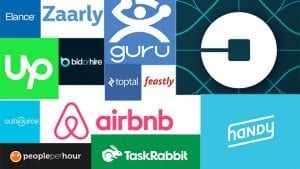 According to Natale, among those growing of late are: real estate, rental, and leasing; taxi and limousine services; finance and insurance; retail trade; and the elusive “other” category (including dog walkers and personal services, among a host of other workers).

Of course, as Fortune’s Anne VanderMey recently pointed out, no one knows how big the gig economy really is.  It’s hard to measure, no matter how you slice it.  “The number of people who say they hold multiple jobs has declined as a share of total workers over the past decade. That seems to belie the ascendance of gig work. But not all freelancers consider their side hustles additional jobs, Harvard’s Lawrence Katz and Princeton’s Alan Krueger have pointed out, making gig economy work somewhat inscrutable.” 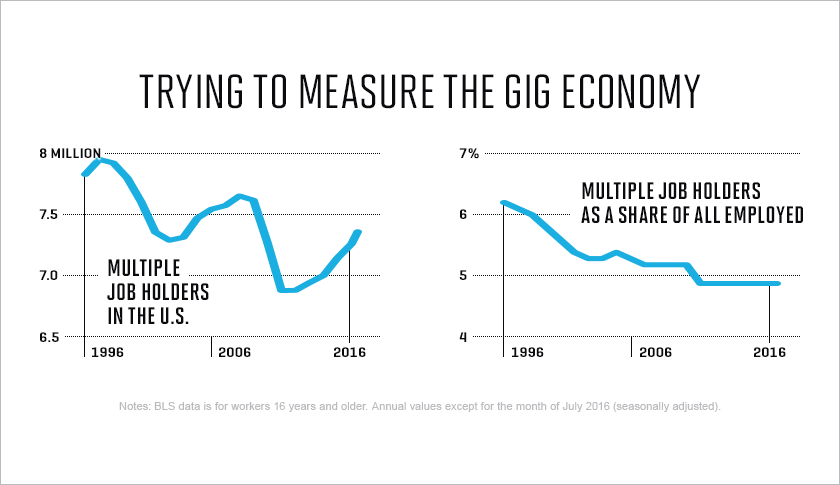 Forbes postulates that there may, in fact, be a bubble in the works.  “[O]ur collective interest and enthusiasm for the gig economy has out-accelerated a natural course of growth, and that we’re overdue for a ‘correction,’ where many companies abandon the idea altogether.”

The Forbes article noted threats like lawsuits and an increasing demand for full-time work and fair compensation, leading the site to predict a slow down.  “I do expect to see new legislation dictating standards for gig-based work emerge by the end of the decade—and that could have a significant impact on how we engage in this system of work.”

Forbes may not be that far off base.  It seems that most workers are still cautious about making the jump to full-time freelancing.  Natale reported that Deloitte polled 4,000 independent workers and found that: “70% said unsteady cash flow and 69% said lack of employer-covered benefits would discourage them from pursuing independent work again.”

It’s not unlike what our LB Post friend, MB City Girl, said when she added to her comments, “I worked freelance for more than 20 years and I regret it now.  It will take me the next 25 to recover from it.  I warn people to seriously consider it.”

So, as a gigging group, are we growing or shrinking?  What’s your take on the topic?  Do you see the freelance bubble bursting in our future or is this just the beginning of a brave new world?  I’d love to hear your thoughts in the comments, below.