I’m such a dork! My biggest-ever royalty check just flew out of my Bentley convertible because I always forget to put the top up!

How sorry do you feel for me?  Not one iota.  And now you probably hate me just a little, too.  Welcome to the humble brag backlash.

According to know-it-all Google, the term hum

ble brag (noun) is “an ostensibly modest or self-deprecating statement whose actual purpose is to draw attention to something of which one is proud.”  In other words, it’s a boast disguised as a complaint.  Real Simple notes that the term was “coined by comedian and Parks and Recreation writer/producer Harris Wittels.”

Recent research–out of Harvard Business School no less–has shown that the humble brag is not the way to go.  New York Magazine paraphrases the research, saying that it, “doesn’t successfully get the intended message across.” 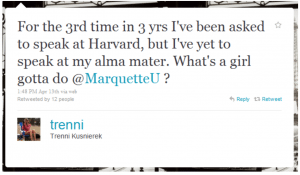 “Two fundamental goals in life are to get people to be impressed by us and feel sympathy for us,” notes the research paper’s coauthor Michael Norton, a HBS professor.  “People think they can get the best of both worlds by being indirect. Instead they are perceived as insincere."

Apparently, “faced with the choice to (honestly) brag or (deceptively) humblebrag, would-be self-promoters should choose the former — and at least reap the rewards of seeming sincere.” 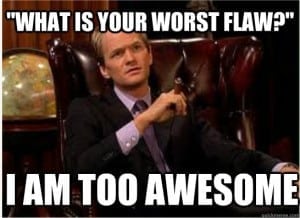 Fortune Magazine reports that “The most common humblebrag may be the job interview game, where the questioner asks prospects what their biggest weaknesses are, while the interviewees go one about the problems of being a perfectionist or of being accommodating and easy to get along with.

In a test of the ‘biggest weakness’ interview question, 77% of responses were perceived as humblebrags and only 23% admissions of a real weakness.”  Surprisingly, however, “People hiring a candidate were less likely to hire the humble bragger than the honest person.”

So, what’s the better way to go about it?

So, go ahead and try it now; have a little brag fest right here.  Type something great you did lately in the comments section below.  It’s good practice!