This week, we take a page from LinkedIn’s editorial calendar: #BigBreak.  The site for professionals asks, “Name a pivotal moment / conversation / project / opportunity that helped advance your career. Who gave you this big break to get ahead?”

I graduated in 1995, and knew that I wanted to excel at this weird thing called the Internet.  At the time, it was "all you can eat" at the UC Irvine computer lab.  There wasn’t a way to search for this type of job, but I knew that websites were built using HTML, so I started using that as a search query.

Luckily, I found a startup willing to take me in and teach me HTML.  I worked there for less than a year.  Then, through an early online users group (read: nerds), I met a UCI Extension teacher, who knew that I could do web design.  Through him, I met the UCIE program director, who was looking for someone to teach a Fall slot. 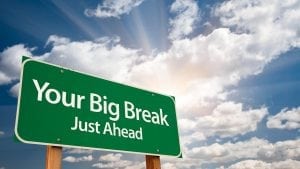 I may not have been the best choice, but I was (realistically) the only choice.  That woman had a slot to fill and I just needed to not screw it up.  I may have only had six months worth of experience, but I was swimming in a small pool.  She took a chance on me.  It was a bona fide #BigBreak.

Landing that gig, gave me the confidence to land another gig just like it.  That Fall, I taught a class through UCI Extension, as well as through a local community college.  Suddenly, I was 24 years old and teaching at the collegiate level.  I was living the dream and, at that point, I thought I was going to teach for a living.

Looking back, it was my first real foray into the gig economy.

I couldn’t believe what they agreed to pay me: $100 per hour for teaching.  In my world, this was big bucks.  What I didn’t factor in was: developing materials, lesson planning, grading homework, having office hours, and more.  When all was said and done, I made less than minimum wage.  But I gave it my all.  And it paid off.  Big time.

You see, my UCI class was filled with people being paid by their employers to take that class.  It was a terrific stepping stone.  One of my students was the HRD Manager at financial giant PIMCO.  At the end of the course, she brought me in to PIMCO and they created a position for me.

It was big-name branding at its finest.  Without the cache of UCI, I would not have made it to PIMCO and, in turn, on to the positions that followed.  It was excellent timing.  It was good luck.

In some ways, this was Marketing 101.  By teaching to the UCI crowd, I was bringing my services directly to the target audience that could hire me for more of the same type of work.  They felt confident in the value I brought because I was essentially auditioning for them every week.  The community college gig didn’t yield the same opportunity: it wasn’t the right target market.  (Companies don’t pay their employees to go to community college.)

This is one of the things I like to teach those new to the gig economy.  If you’re going to take a job that will end up being essentially minimum wage (when all is said and done), make sure it can be parlayed into the next stepping stone.  Keep an eye out for those rare opportunities and that elusive #BigBreak.